Until The Day I Die

Until the Day I Die is the story of a female Jesus rising against an evil dot com CEO, who wants to control the world by forcing commercial power upon civilians while the corporate media and puppet politicians are blindfolding the public. Jesus fights back with special powers, recruiting people for massive anti-corporate demonstrations. The battle beings…but is there any hope for saving humanity? The film stars Leslie Matuko Molson, Jim Graham, and Dave Buchwald.
Directed by Samoa

My Way to Hell 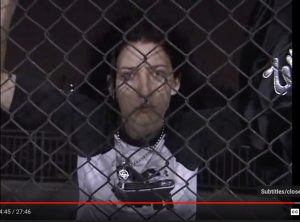 My Way to Hell is the story of a character named Karen, who is obsessed with fame and tries to lead her band into stardom—but the band members have no intention to follow her wishes. Brokenhearted, she goes into a dark depression. The film features trans star Jack Curious, Samoa, Kari Krome, Walter Cassidy III, Amanda Pollock, Dick Manitoba, and Kembra.